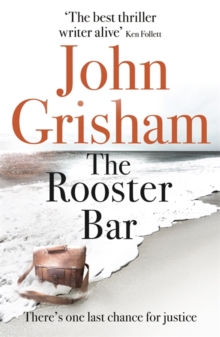 The Rooster Bar by John Grisham

Well Johnny keeps knocking them out the typewriter doesn’t he! I thought I had read his most recent and then BAM I catch this one in Costco (my new favourite book store).

A story of some law school drop outs thinking they can take on the legal profession without having a clue about how to practise law….officially. There was a lot of foreplay. Literally the first three quarters of the book was I suppose just filling the reader in on the characters and some scene setting. I think the ending was good, and I enjoyed the twist (despite being able to see it a mile off). But, I really struggled my way through this. I was also really annoyed that the back cover of the book claimed that the main characters had to dodge the FBI……which kind of did happen, but only at the very very very end and for like half a page. Can I sue for false claims?

This book can only really be described as a palate cleanser, like a lemon sorbet. Its nice, I enjoyed it, but I am really waiting for the main event.