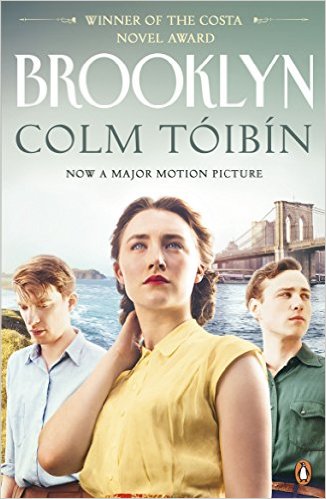 I was at a train station, serious delays in every direction and I would not be leaving anytime soon. To top off my bad luck, my kindle had run out of battery. It was time to purchase a real, paper book.

I perused the bestsellers in WHSmiths and found Brooklyn. I had seen the film advertised and as always I prefer to read the book before watching the motion picture. The blurb on the back wasn’t exactly captivating, but it had won the Costa novel award in 2009 and had been short and long listed for a few other awards since. It seemed like an easy read that would help me pass the time.

It is set in 1950’s Ireland and is the story of a young girl, Ellis,  who has grown up in a small rural town with her mum and sister (and a few brothers who have since moved away). She has no real prospects until an Irish priest from Brooklyn offers to sponsor her in New York where she will be able to live, work and study for a better future.

She travels to New York by ship, and has a bumpy ride. She finds a lodging with some other similar minded women, a job in a department store, an evening course and eventually love. But, as with all soppy stories there is also another man, this one all the way back in Ireland.

It is basically the story of Ellis growing up and having to choose between two boys. I would say it is half interesting and a very tame read. There was one dramatic plot twist which I didn’t see coming and actually upset me a little. But I soon go over it and realized I was back in the monotony of this read. This book is exactly the reason why I tend to avoid the WHSmiths bestsellers.

If you want an easy holiday read about young love, dances and courting then please…be my guest!