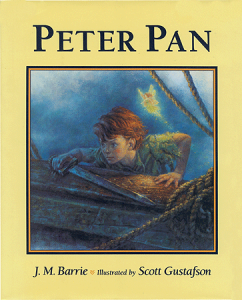 A book that was constantly being recommended to me, so, I have finally gotten around to reading it (sort of).  The story began well, I was beginning to feel engrossed. However, there were two factors that irritated me tremendously; the first being that the book was originally a play. Therefore, the narrative is never really that clear, and there were moments where I felt the book really needed the reaction of the audience to carry it through. The second point being the target audience – children. The writing style is short and to the point and there is rarely an elaboration, tolerable to an extent. Except, when the writer decides to add in anything he pleases, randomly, to help the story along…..so frustrating, and ultimately my downfall. I only read this book up to 82% of the way through. I tried so hard, but in the end Barrie lost me. I was lost amongst the lost boys themselves.

A much darker story than the Disney remake, with strange adult/child relationships and child/child sexualisation (Wendy and Peter, Peter and Tiger Lily…).

I don’t think you will be missing much if you bypass this story. There are far better classics in the literary world.